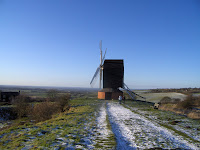 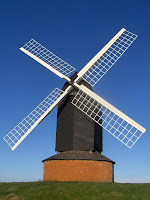 We're back and it's bloody freezin!
Travelling from 35°C to -3°C in one day just ain't right ! Anyway, even though it's cold, the weather today was ideal for a stroll in the countryside. It was one of those really clear blue sky days, so we headed to "Brill on the Hill". It's about ten miles from Oxford and sits on the highest point for miles and miles. There's some nice views from the top and it also has a good pub and a pretty windmill to keep us entertained. 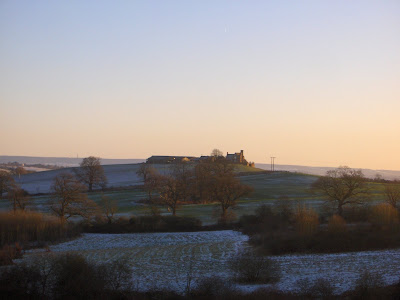 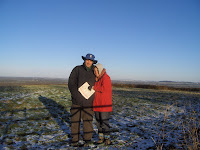 There's isn't really any snow in Oxford, but the hills have had a dusting, which made for a nice stroll, but stressful driving on the untreated back roads. Anyway here's some photos of us wearing much, much more clothing than we've had to for quite a long time. I reckon Athena looks like a character from Fiddler on the Roof and I must remember to shave before close up shots.... 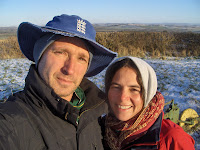 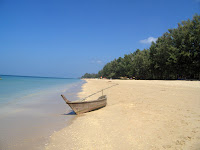 Woah, this place is laid back. Once you've got through the swarms of taxi and hotel touts that attempt to drive the tourists back into the sea as they try to climb of the boat, this island slows down massively. The coastline is one huge palm-tree fringed beach with just the occasional rocky headland to add interest. Development is very low key, with nothing to be seen from the sea front at all. There's quite a lot of big resorts here, but they're buried in the trees as are the bungalow type guesthouses that we stayed in. 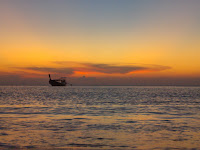 There's a scattering of small bars and food shacks every four hundred metres or so and the food, as with the rest of Thailand, is really good. Bit more expensive here, but still very good value compared to Europe. There's no light pollution here so at night it is absolutely pitch black. Just in case you happen to come here, remember to bring a torch if you've gone for some sunset beers on the beach....

Phuket ( unfortunately, it's pronounced Poo-get )
Phuket is a large island ( somewhere between Isle of Wight and Mann sized ). It's ringed with beaches and we didn't really know which one would be best to stay at, so we decided to stay in th 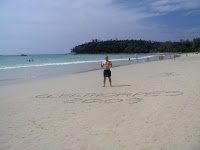 e old town of Phuket instead and use the local buses to ferry us around the island. I say buses, but they're really just old flatbed trucks that somebody has stapped a wooden bus-like rear end on to.. We started with Patong beach as Athena was on the hunt for knock-off designer handbags. Patong is pretty much Costa del Thailand. Not really our kind of thing, but to be fair the beach itself was great and the market did come up trumps with a selection of dodgy items, though we were both thoroughly fed up with the circus act required to actually buy anything here ( haggling, posturing, mock walking away, hand waving etc etc ). Kata beach, which is just a little further south, was much more like it. It was still way busier than Ko Lanta, but had a much more relaxed vibe than Patong. Not one person tried to sell me a tailor made suit. The water was warm and crystal clear, the beers were ice cold and the papaya salads were lip stingingly spicy. Perfect.

Slog.
As I finish typing this, we're about to get a tuk-tuk to Phuket airport where we'll leave salty damp patches and sandy stains on the plane back to Bangkok. A brief overnight at an airport hotel later and we'll be back in the air heading for Abu Dhabi and then London. Must remember to dig an extra t-shirt out. I suspect waiting for the bus back to Oxford might be a bit chilly.
Posted by Al at 07:37

We're into our last ten days of our time away now so we're going to hop around the islands off the coast of south west Thailand in the Andaman Sea. Time for some beach R&R !

Krabi.
We got a bit of a shock here. This famous Thai seaside resort town, isn't actually by the sea. It sits on a river several miles inland. Arse - must read the guidebook better. This was easily remedied with a forty minute songthaew ride ( back of a pickup truck ), but certainly gave us a trembly lower lip for a moment when we first found out, especially coming on the back of a nine hour minibus epic from Georgetown.

Ao Nang.
This is a small beach town just up the road from Krabi. It sits 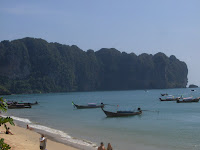 alongside 1.5km of golden sand in a bay surrounded by karst mountains. It was quite developed, but was nicely done with virtually all buildings below the palm tree line. It was nice to be back in Thailand with consistently the best food in South East Asia - chicken in tamarind sauce - fantastic. We took a walk upto the end of the beach in the photo and found a troop of small monkeys doing exactly the same as their human neighbours, namely lounging around in the sand and cooling off in the warm sea. Very entertaining. There were also evening Ladyboy shows with Cobras ( the mind boggles ) if you like that kind of thing. 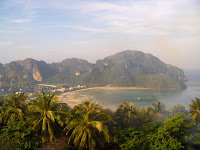 A couple of hours across the sea by fast ferry are the Phi Phi islands. We arrived late in the afternoon, but had found accommodation and had got ourselves out in time to find a beachfront restaurant whose ploy to entice customers was to play Shakin' Stevens tunes. Athena admitted that Green Door had been her first ever record purchase, so we had to go in.. Food was good mind. We did hit a small snag later on though ... We hadn't noticed the roof top 'stealth' bar ( ie quiet during the day and very loud during the night ) when finding a hotel. Not a good night, but we managed to move rooms in the morning.
Ko Phi Phi is one hell of a bit of geography. Its classic karst limestone scenery gives it twin white sand beaches with a small town in between and shear cliffs either side. The water is crystal clear, stuffed with fish and was running at about 30°C according to the diving shops. Have a look at this aerial shot.

We had an amazing snorkelling trip to the smaller of the two islands in the group( Phi Phi Lei ). It was like swimming in a tropical aquarium. A stunning number and variety of brightly coloured fish. On the way home we stopped off in Maya beach which was the main location for the film "The Beach". It was pretty obvious why with it's stunning lagoon, tropical waters and icing sugar sand. We finished off with a gorgeous sunset out to sea. Nice day ! 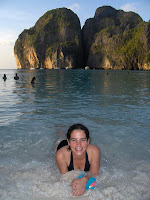 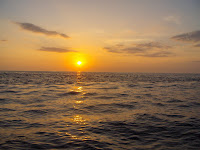 Here's a view from the boat as we headed into a Ko Phi Phi Lei lagoon. 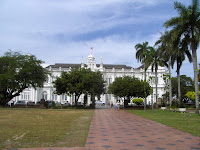 This town on the North West coast of peninsular Malaysia was established by the venerable British East India Company as it sought to establish a presence in the straits of Mallacca. This was largely to wind the Dutch up who had been busy running the port of Mallacca just down the coast since they pinched it from the Portugese a few hundred years previously....
It's a little bit like Hong Kong ( in that it's an oriential island port established by the Brits etc ), but lacks the trading clout of it's Chinese sibling. There are quite a few big business tower blocks, but there is also a liberal smattering of colonial edifices. It's not a bad place, but we're struggled a bit with the heat and humidity to be honest, so a couple of days was enough for us. 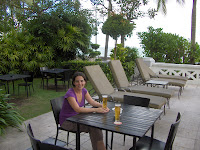 Must admit that the ready availability of India food was a big help though.
Athena talked me into some sundown beers in the very posh bar of the Eastern and Oriental Hotel one evening. It was all very posh, with fellas in '50s shorts and pith helmets opening the doors, and waiters dressed in tuxes serving the booze. Nice, but I could dine for a week on the price of half a shandy here. Nice nuts though (bar snacks, not the waiters).
To escape the heat a bit, we took a funicular railway up to the top of the island's highest point, Penang Hill. The peak is eight hundred metres above sea level so it knocked a good five degress of the air temperature and the humidity didn't seem as fierce. The views were good, but a bit hazy. The best overview I can give is this bit of video taken as we approach the docks when arriving on the ferry.

Final thing to report is a funny conversation we had with a old fella who worked occasionally in the guesthouse we were staying in. It turns out that about fifteen years ago he retired from the police service where he'd risen to the rank of Assistant Chief Constable of Penang. He'd actually joined the police back in 1955 when Britain still ruled the Malaysian roost. He told us that the pay wasn't very good, but that he'd soon realised that there was a fortune to be made from back handers etc. He was posted down to the south of Malaysia to Johor, so he would send most of the dodgy money back home to his Granny for safe keeping and also to help with the upkeep of the house and to look after his two younger sisters ( both his parents had died ). He did this for quite a while, so was very surprised to see little evidence of the money when he eventually returned to Georgetown on leave. A nephew explained that Granny was spending a lot of time a few doors down the road at an illegal gambling den. A few quiet words established that Granny had blown the lot gambling on dice. He reckoned she'd lost around 100,000 Ringits at a time when 6000 Ringits would buy a small apartment ! He obviously had a few words with Granny and his gambling neighbours, but when the money was still being lost he eventually obtained an arrest warrant, and picked up everyone in the gambling den, including Granny, and dumped them in the cells for the night. Apparantly, even after this Granny still couldn't be trusted with the cash, so he simply didn't send any home anymore. Slightly ironic, that all the cash he was raising through underworld corruption in Johor, was being return, via Granny, to the underworld in Georgetown. Nice old fella. Bad teeth though. Or should I say tooth.
Posted by Al at 05:05