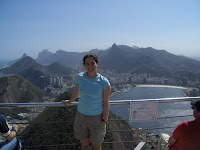 Well Rio has proved to be a cracking place to start our trip. It was a bit of an easy start because we met up with Una and Paul ( Athena's big sis and her husband ) and John and Allie ( Allie is an ex collegue of Athena ), so we were lowered into Rio life without a bump.
The weather has been great for cruising around ( mid twenties °C ) so we've already seen alot. The view from the Sugarloaf mountain and the ( slightly cloudy view ) from Christ the Redeemer were spectacular. The city has been built in the most ridiculous place - it nestles down amongst huge moutain peaks. The beaches of Ipanema and Copacabana have both been great, but the waves are quite punishing. I was knackered after about 5 minutes.
Food has been very good. It's a real carnivore's paradise, but the prices are not quite a cheap as I ( Alan ) had hoped. Beer has been Euro style - Bah.
Highlight of the tour so far, has to be a trip to see a local Rio football derby. Vasco de Gama played Flamengo in the Maracana stadium. The stadium was built for the 1950 World Cup and is the home of Brazilian football. The atmosphere was truly 'loco' before kick off as the rival fans vied to out perform each other. The game itself was pretty much irrelevant compared to the entertainment going on around us. Have a look at the video clip below !