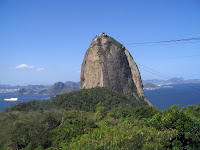 I think I mentioned visiting the Sugar Loaf mountain in the previous entry. I only mention it because I wanted to include this additional photo of it ( top left ). Imagine having this a stone´s throw from the city centre ! Spectacular doesn´t even start to describe it.

We polished off Rio by visiting the Centro. Surprisingly pleasant city centre. I had imagined something a bit more squalid and downtrodden, but it was very fancy. Lots of grand buildings and plazas etc . It does seem to be a bit of a binary city - There are very affluent pleasant areas and there are also the Favelas. The two just don´t seem to clash (but it may be because we have a cloistered tourist view of things) 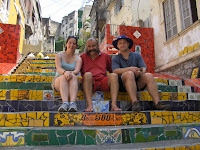 Athena talked me into a bit of culture ( Culture ? I´ve been to Leeds . .. .. etc etc ). A Chilean artist has taken to decorating an old staircase in the St Terasa area with tiles. He collects them from all over the world and also paints many of his own. Sounds a bit crap but it was really nice. The picture is of us with the great Seleron on his staircase.
In case you were worried that we might be over doing it a bit, we´ve also managed to find time to indulge in a bit of Ipanema beach action . Jeez, those waves are powerful. It´s like being in a washing machine...
Posted by Al at 22:37