Ayres Rock and The Olgas 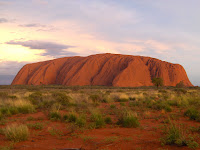 Ayres Rock ( Uluru in the local Pitinjara language which I have almost certainly spelt very very badly ) is pretty much slap bang in the middle of Australia. It took 3 hours to fly here from Sydney !
You get what you expect from Ayres Rock, in that it is simply a bloody great big rock sat in the middle of the desert. It's about 350m high, 7 miles around, but amazingly, descends more than 6km down under the desert floor. It has great cultural significance to the local Aboriginal folk so these days 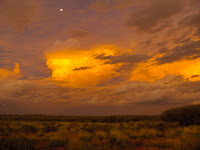 they request that you do not climb the rock. As it happens, we never got the chance as the Park Rangers closed off the climb due to excessive temperatures. It got to just over 40°C later on, which I can assure you, is more than a little warm. We walked all the way around the base of the rock and we're absolutely knackered by the end of it.
Ayres Rock is a very spectacular sight at the best of times, but sunrise or sunset tends to really bring out the colours of the rock. Mind you, the clouds at sunset were pretty amazing too. 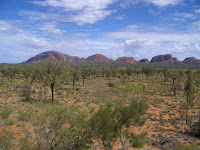 About 60km away from Ayres Rock are The Olgas ( Kata Tjuta ). They are a similar formation to Ayres rock, but rather 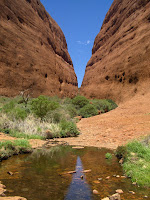 than being a single huge monolith, they're a group of rocks sprouting from the desert floor. They're actually a little bit taller at 500m. They're not quite as impressive as Ayres Rock, but are probably prettier and are certainly more interesting to walk around. Again the temperatures were sniffing the 40's, so it took a fair bit of effort to drag ourselves around the 6 mile walk though the rocks. Mind you, a tea of Emu, Kangeroo and Crocodile was waiting for us at the end....

Here's a view from within the Olgas.