We were staying in Sydney just before Xmas with our mates Tristan ( AKA The Wife as known by Honda F1 folk ), Shelby and their nipper Zara ( 8 months old, so definately out of the wrapper, but still very, very tiny ). We were made to feel very welcome by Tristan's family, Keith, Lana, Claudine and Rob and also by Shelby's Mum and Dad, Vince and Janice as we sat down to a fantastic roast pork Christmas lunch on Christmas Eve. We had the big meal and pressie opening ( and again w 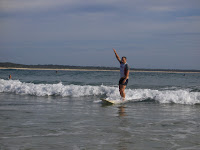 e were made to feel so 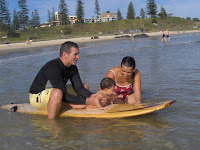 much at home - great Aussie hospitality ) on Christmas Eve because on Christmas morning we loaded up the cars and headed about 5 hours up the East coast to Port Macquarie. By mid afternoon on Xmas day, Athena, Zara and I were having our first surf lessons, courtesy of Shelby's surf guru dad, Vince. Here's a couple of shots of Zara's and my first attempts. Athena swears she stood up too, but I never saw her.... 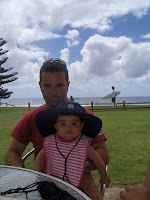 For Boxing Day, we headed over to the McGuigan's house for a backyard cricket reenactment of The Ashes. It was a bitter-sweet day for reasons I'll explain a little later. We were expecting a small gathering on the back lawn of perhaps 20 people. As it turned out, John McGuigan had knocked up a wicket in his HUGE front lawn and there we probably 40 people playing the game and at least as many watching from the boundary. The Poms took the first innings, but the Aussies prevaled in the second. It was a close game, but at least the Barmy Army could claim a clear and decisive victory with some world class sledging and chanting. We even managed to assimilate Zara Timmins into the Pommy side, though Tristan didn't seem too happy. It was a fantastic way to spend Boxing Day, and everyone had a great time, though our friend Alison McGuigan was greatly missed.

Alison lived in Oxford for several years and become a great friend to many of us, but about 18 months ago she was diagnosed with Luekemia. She responded well to treatment in the UK and managed to get home to Oz for Xmas 2006. Her treatment continued in Australia and seemed to be going well, but she contracted a lung infection in early September and died only a few weeks later. Life just ain't fair some times.

To end the post on a less sombre note, here's a quick sweep of Port Macquarie....