New Year Down Under. 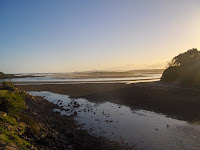 After a few extra days catching some rays and enjoying the surf in Port Macquarie, we loaded up the cars again and head further up the East coast to Sawtell, a great little seaside town just outside Coffs Harbour. Vince and Janice ( Shelby's Mum and Dad ) and their friends Bruce and Penny had very genorously organised a lovely house on a river estuary for us all to stay in. Have a look at the view from the back garden ! 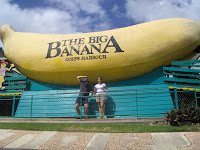 Just up the road from Sawtell is Coff's Harbour. As well as being the home to the Big Banana ( thus attracting the common Smythe Gibbon ) it also gave us our first taste of the cyclone that was building just off the east 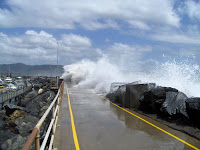 coast. The surf was pretty huge by this point ( way bigger than surf guru Vince thought safe to brave ) and was breaking over the top of the harbour wall. Walking back was going to be a bit dicey...


After a couple of days around Coff's, Tristan, Shelby, Zara, Athena and I carried on further north to the famous beach town of Byron Bay ( it was named after the poet by Captain Cook apparantly ). We got there late afternoon on New Years Eve, but we were so knackered by the 5 hour trog in appalling weather that we were all in bed by 10:30pm. Rock and roll !!

The following day we started to explore some of the awesome beaches, though the pesky cyclone was making its presence felt and the weather was becoming very English ( The two photos below were only taken a few minutes apart ) ..... It didn't stop us having a great few days bobbing around in the bays, though surfing was definately out for sane humans as the waves were very vicious. Byron as a town made me feel a bit old to be honest. I think we'd have fitted in a bit better about 10 years ago ! 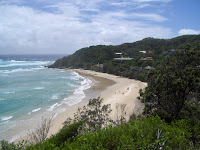 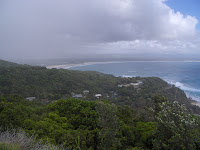