Out on the Sauce in Sydney 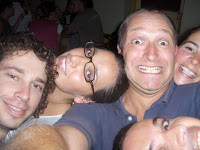 We returned to Tristan and Shelby's house in Sydney for our final few days in Oz. They'd read the bit on the blog about us liking Melbourne, so they insisted on a big night out in the city to correct our vision....

We headed into the Rocks area, under the south end of the Harbour Bridge. It's one of the oldest parts of the city and has retained many of the original buildings and, if you avoid the really touristy bits, still has loads of really good pubs. We met up with Shelby's cousin Dean ( we'd met him in the UK and he'd just returned from Calgary in Canada - these Aussies get around ) and 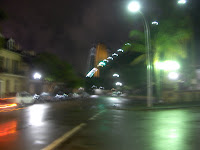 embarked on a good old fashioned pub crawl. Pretty soon, the harbour bridge was looking like the photo on the right. We found one pub, The Mercantile, that had a great band playing so stayed there for a bit while Dean chatted up the table of girls next to us. Impressive technique ! All in all a great night out on the sauce.

Next morning was a bit slow, but fortunately, Sydney has a huge selection of beaches and coves to swim in, so a bit of salt water therapy removed any lingering hangover symptoms. Fair play to Sydney !
Posted by Al at 04:45