After the excitement of the rafting in Rotorua, we headed further south for a couple of hours until we hit a town called National Park ( cunning name huh ? ). The reason for stopping here was to walk the Tongariro Crossing. It’s a 19km hike with a 900 climb to pass between two volcanoes, Mount Tongariro and Mount Ngauruhoe plus we added another 5km and another 300m climb to get to one of te peaks. Knackering. The area was used by Peter Jackson as a location for Mount Doom when he was filming the Lord of the Rings films. It was a fabulous walk, but jeez, we’ve got out of shape since leaving South America. . . . . .Lucky the scenery was good !

Here's the view the previous evening and then another of the same mountain once we got up close. 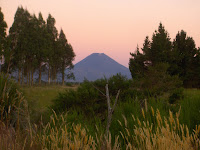 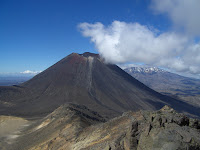 There were some fabulous views on the way back down. On the left are the Emerald Lakes ( you would not want to drink this water ) and on the right is a view all the way back to Lake Taupo. 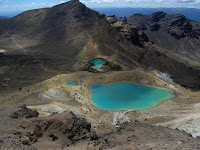 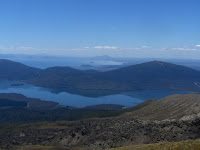 Here's a quick video vista from the tops.