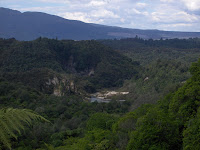 First thing you need to know about Rotorua is that it smells. Bad eggs. Sulphur. A tag-team chuff off with Baz and Lav..

It's about 3 hours drive south from Auckland and it is one of the main geo-thermal areas in New Zealand. The town is surrounded by bub 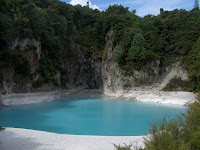 bling mud pools, smelly fumeroles, sulphur pools, geysers, old craters and such like. We visited place called Waimangu Thermal Park and by the time we walked around it, we were ready for something less smelly.......

Which is fortunate, 'cos Rotorua is also the major adrenalin activity centre for the North Island. We decided to raft down the Kaituna River. It was quoted as grade 5 ( which is supposed to be quite bumpy ), but the major selling point was the bit where the raft careers off a seven metre high waterfall. Not too much to say about it, other than have a look at the following sequence of photos..... ( it's us honest ! )

Too late to change our minds...

It's also worth including this photo from a later rapid. The foot poking out of the water on the left of the image is Athena's ! Don't worry folks, we fished her out.