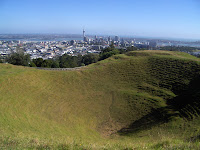 We're in New Zealand now and have met up with our travelling chums from South America, The Dog and Becky. The weather wasn't looking too great when we first got here, but that didn't stop us cruising down to the docks for some tea. Auckland is known as the 'City of Sails' and there were plenty of boats bobbing around in the harbour to justify the name. The next day was a bit lazy to be honest. We cruised around the town checking out the sights and also performing dull tasks that needed to be done. We did visit an excellent museum though. The Auckland Museum had some great stuff in it, including a 'volcano experience' ( which was scary ) and also a demonstation of the Haka by a bunch of Maoris ( also scary ). Me and the Dog thought about facing them down with some Morris dancing, but our hankerchiefs didn't match and I'd forgotten my bells..
The next morning we were up early to head further North into the North Island, but we popped up to the peak of Mount Eden, an extinct volcano, for a spiffo view of the city. The tall building you can see is called the Sky Tower. We're off up there for tea tonight ( and will meet up with our mate Joe from Leeds - it's a small world ! )
Posted by Al at 05:21