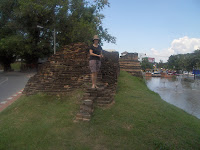 Chiang Mai is the capital of the Northern provinces of Thailand. It's quite a big city ( might be the second city in Thailand at around two million ), but it has quite a small town feel. The central area of the town, and the bit that's most interesting to tourists is a 4km square surrounded by what remains if the old city walls and a fully intact moat. Not for swimming in . ..

Inside the walls are numerous Wats, temples, monuments, markets etc etc. The main Wat is very sacred in Thailand as it is the place where an elephant carrying a fingernail of Bhudda finally dropped dead about eight hundred years ago. 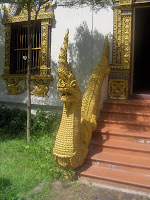 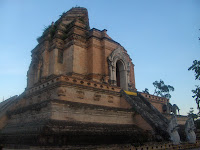 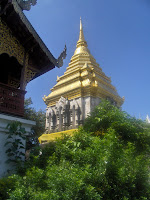 We've been staying in a really nice guest house ( Libra - recommended ) and have discovered a fantastic food market just around the corner. It seems to be some kind of cooperative system where you ask for what you'd like to eat and drink from a common menu and then various stalls whip up food and drink depending on their various specialities. Really tasty food, as fresh and it could possibly be and all for the bargain price of 1 pound each.
We've also explored beyond the city by hiring a snarling beast of a motorcycle ( okay, it was a whimpering 100cc step-thru.. ). About sixteen kilometres away is Doi Suthep. It's another famous Wat. Impressive, but not as good as the ones in town, but it was worth the journey as it sits on top of a big hill and affords a top view of the entire city ( bit hazy, so no nice photos ). Also up there were the Bhupin Royal Thai Winter Palace Gardens ( nice if you like roses and stuff ) and a glorious water fall ( which Athena fell in ). 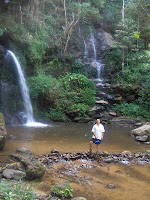 We also found clumps of giant Bamboo. Just in case you wondered how tall it can get, have a look at this vid. I was thinking about how big the local Panda's must be !