One of the attractions of the Chang Mai area is the chance to head up into the hills and go trekking for a couple of days. It's a really popular thing to do and the market is pretty cut-throat. It was very difficult to split out the expensive and exploitative ( of both tourists and locals ) from the cheap and crap, but we seemed to manage it with the help of the guest house staff. 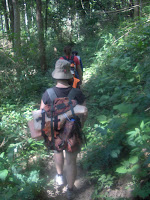 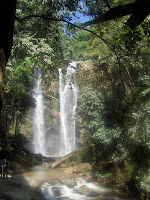 We started off with about an hours drive in the back of a pickup to a 50' waterfall. Really nice to cool down in it, but painful if you stood under the main part of the flow. A short hop up the road took us to some geothermal pools. Just what you need in the heat of Thailand..
And then the trek proper. It was probably about ten kilometres long, but it was much very up hill and down dale, and in the temperature and humidity it was pretty tiring.


We passed through a couple of isolated villages on the way. The hill tribe people here are very much separate from the rest of Thailand. You might just get a moped along the tracks, but certainly nothing bigger. They live an agricultural life up in the hills and supplement their income by selling food and drinks to the occasional tourist. We passed through Karen and Lahu tribal areas. The Karen are the folks that you may have seem with multiple brass rings round their neck, though apprantly this is only really done for the tourists. Bah. 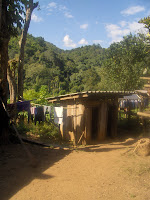 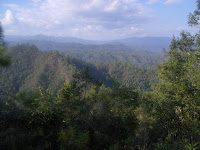 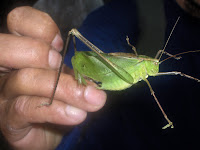 The views along the trek were great. Lot's of interesting wildlife ( giant grass hoppers and beatles for example ) and lots and lots of forest and jungle.

We stayed the night in a hut in a Lahu village. It was a pretty basic arrangement, just blankets on the hut floor, but after the exertions of the day and the slightly cooler nights up the hills, we had a really good night's sleep. This was despite the squawks, grunts and growls of the village dogs, cats, chickens and pigs as they indulged in dawn games of tig. The showers were in the local river, which was fine until you realised that there was alot of elephant crap floating downstream as you stood there in your pants scrubbing away....

Next day we needed to continue our trip along the river ( the Mae Taeng ). We thought that seeing as we had suffered the elephants crapping in our bathwater the previous night, we might hitch a ride. Very serene, very quiet, but a long way up from the ground. Much better than horses though, but they did seem to poo and eat continuously which explained the profusion of floaters in the river. 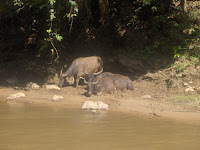 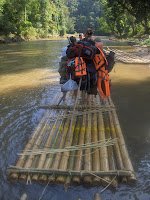 Final leg of the trip was on a bamboo raft. It was about a 25' x 5' affair lashed, very skillfully together with grass. Once loaded, it sat about 2" below the water, but seemed pretty stable for our voyage past slumbering water buffalo. Steering was via some long bamboo poles, not unlike punting. We did navigate a couple of minor rapids (yep - Athena got wet again) which added to the excitement as did spotting the small, but very fast, snake swimming towards us.

We're leaving the Chiang Mai area now and started heading North East towards the border with Laos.
Posted by Al at 03:31