Chiang Rai is the last major town in North East Thailand before hitting either the Burmese or Lao border. It's about the size of Pontefract / Newry / Banbury. It took us about 3 hours on the bus to get here from Chiang Mai. It was a very picturesque trip, but unfortunately, the bus was designed for small Thai rear ends and had a five across seating system. Bit on the tight side for the likes of me. I was very glad to get off at the end of the trip.
At first we thought we might have made a mistake by staying a full day here. It was very much a utilitarian type of town, but after wandering around a bit we found a great museum and a fantastic market. The museum was in an old Wat and told some of the local history and showed of lots of the district treasures and crafts. The market was huge with everything from fish, meat, spices, garlic, chillies, fruit, veg, clothes, pots and pans to very tasty and very cheap water melons. We had an interesting conversation with a local lady whilst troughing the melon in what we thought was a park, but turned out to be a school.
Treat of the day though, was the night market and festival. We had various explanations for the festival ( Thai New Year, Light, Water, Flowers ), but either way, it took over the town centre with stalls selling food, toys and crafts. We indulged in griddled skewers of spiced pork and beef, prawn tempuras, salty fruit drinks ( surprisingly nice ! ), squid, BBQ prawns and a couple of helpings of grubs and crickets ( both quite tasty - bit like pork scratchings ). 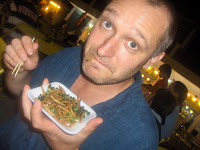 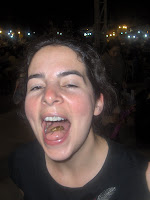 Whilst we were munching our way through the local delicacies, we were entertained by traditional Thai dancers, a really good Thai folk group ( with a twin neck Mandolin - eat your heart our Led Zep ! ), some dubious karoke, and even a Thai soft rock group. Top night out. We even managed to catch the last few laps of the F1 Abu Dhabi GP in a local bar. Nice to see Jenson and Brawn finish their championship season with a podium finish.
Posted by Al at 05:55