Bit of ying and yang on this trip...

We'll start with the ying. 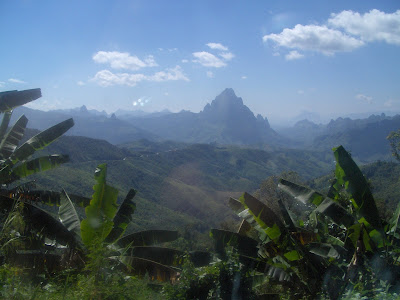 This was a bus journey through epic scenery. Imagine a jungle clad version of the Pyrenees and you're getting close. Several times the bus wheezed it's way up mountain passes to emerge above the clouds and to give us stunning views of jagged mountain peaks poking out of a sea of cotton wool. As we climbed and descended we passed through countless little hamlets clinging to the hillsides. They were all made up of small wooden houses and huts with walls made from woven banana leaves. There were dogs, cats and pigs scurrying everywhere, queues of kids having their daily hosepiping by the side of the road and huge flat baskets of chillies and fruit drying in the sun on the roof tops. It looked idyllic, but I suspect the reality of life here is piss poor. There was a much more obvious communist influence here than we'd seen so far in Laos. There were many collective farms along the way, and most had huge Soviet style billboards at the entrance with stylised images of farm and factory workers. Real hammer and sickle stuff. There were even a few folk wondering along the roadside with guns. I'm hoping they were for hunting, but what do you hunt with an AK47 assault rifle ? Wabbits ? More like capitalists.

And the yang.
It was a ten hour trip and we can't have been on a straight bit of road for more than thirty seconds throughout the journey. We had to suffer a constant barrage of dreadful Lao pop-bilge-soft-rock-drivel from the poxy, but undeniably, powerful bus stereo. The bog stunk like a Parisian pissoir in July. The bus performed frequent emergency braking manouvres to avoid sundry cows lying in the road and at one point, a fat brown snake. The final two hour trundle into Vientiane across agricultural planes was interminably tedious.
Posted by Al at 08:20