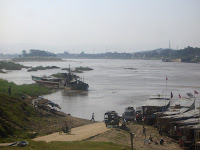 Morning found us boarding a boat, along with about seventy other folk for the two day trip down the Mekong to Luang Prabang. The Mekong's source is in the Tibetan Himalayas and it passes through China ( about 200km up river ) and Burma before getting to the Lao / Thai border. Even though we are only just at the end of the wet season, the river didn't seem that high. Looking at the debris on the rocks and river banks, it looks 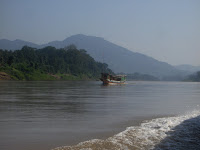 like the spring snow melt in the mountains could easily add another ten metres to it's depth. This is a serious river... All along the journey the boat was negotiating whirlpools and eddies, rocks, narrow ravines and various other types of hydro-tomfoolery. Hard to know if it would be easier with more water in the river, or more dangerous. 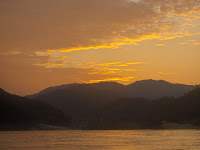 At the end of the first day the boat pulled into a tiny river side town called Pak Beng. Pak Beng survives s 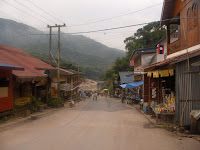 olely on river traffic, so the arrival of the boat provokes a bit of a feeding frenzy as the local hostels and hotels vie for custom. Food and beer was cheap ( about 8000 kip or 55p for a large bottle of Lao beer and 9000 kip or 70p for a litre bottle of Lao whiskey... ). Only problem in Pak Beng was that whilst the Thais had the good sense and manners to drive on the correct side of the road, Laos had the grave misfortune to be colonised by a bunch of cheese obsessed Frenchmen and consequently, they drive on the wrong side of the road. Pesky.

Next day was more of the same as we continued our journey downstream though jungle clad hill sides, ravines, rock faces and the occasional village on the banks. Apparantly, there are some blind river dolphins in the river, but we never spotted 'em. The approach to Luang Phrabang took us by surprise. We seemed to pull into a quiet, heavily forested river bank with only a few buildings to be seen. I'm hoping the town is up there somewhere, otherwise we've got off the boat at the wrong stop. Mind you, my arse is killing me after two days on a hard wooden bench.. 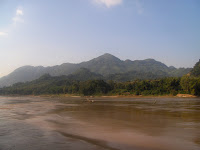