Now just to get it out of the way at the start, let me tell you that Kuala Lumpur has rubbish street signs. Absolutely, useless. There, that's better. 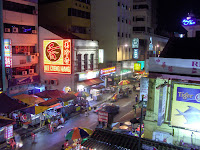 We're staying right in the middle of the city in Chinatown. It has a real hubbub. Here's the view from our window. It was a top location for food and beer ( expensive though ! ) and for buying even more dreadful tat in the famous Petaling Street Market. It also drops us in the middle of all the disparate Malaysian transport systems, that almost link up.... 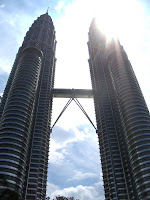 What have we been doing in Malaysia's capital city ? 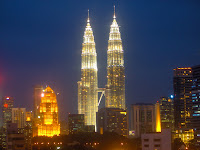 Well, first we took some advice from our agent on the ground (cheers Anu). The Petronas towers are very impressive. I'm not usually one for shiny objects, but these take the biscuit somewhat. We went up the KL Tower ( a big communications tower in the middle of the city with a big viewing gallery ) and had a great view across the city. It's a real mix of low rise, high rise and greenery. We also schlepped across the city to the City Mosque (very busy with prayer time so didn't actually go in) and to the National Museum which gave us a nice insight into Malaysian history, right up to the present day. 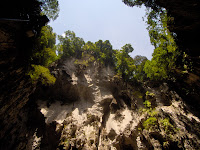 The local buses are good and cheap, so a quick hop on the No 11 dropped us out to Batu where there are some vast caves. They are used as a Hindu shrine these days, but are open to the public. Very impressive and I was especially delighted by the indigenous population of cave chickens doing battle with the cave monkeys for the rights to bananas.

We only spent two days in the city, but seemed to have filled them. It's very, very hot and humid here which tends to make life for us pasty faced Europeans a bit of a trial, so we're knackered again. I think a day trip to the seaside might be in order.

Did I mention the rubbish street signs by the way ?
Posted by Al at 09:58