Sihanoukville - Oh, I do like to be beside the seaside... 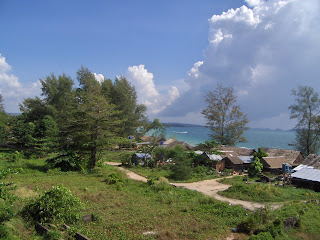 Sihanoukville is a coastal port about two hundred and twenty kilometres south east of Phnom Penh. Fortunately, one of only two fully paved sections of road in Cambodia head this way, so the bus journey was a quite pleasant four hour affair. The town was orginally built about sixty years ago to provide Cambodia with a deep water sea port as an alternative to the Mekong Delta which the Vietnamese were taking over.

It's quite a spread out town, with several long beaches. The one we're lurking at has a string of beer and food shacks along the edge of the beach for breakfast, dinner and tea. Very nice . Especially for BBQ fish, squid and shrimp. It's still a few weeks from high season here, so it's all a bit on the quiet side, but not that that bothers us. It's nice to escape the chaos of cities for a few days. 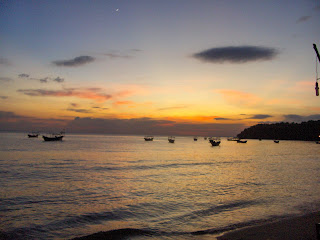 The beach itself was nice white sand with an occasional rocky patch to give a bit of interest. There was a serious storm here about three months ago that coincided with a spring tide that managed to strip away fifteen metres of beach. As a result, at high tide, the water is right on the edge of the food and beer shacks. The owners are all a bit cheesed off. They reckon the beach will recover, but it might take a few years. They're worried about the loss of trade, but to be honest, unless you intend to spend a lot of time sunbathing, it wasn't a problem. And if you do spend a long time in the sun here, you won't have any skin left.
The sea is ridiculously warm - just over 80°F. Apparantly, just beyond the beaches, the sea bed drops away to about seven metres and then maintains this shallow depth for miles and miles and miles. The sun, which is skin shrinkingly hot, doesn't have much mass of water to warm up. There's some decent snorkling to be done amongst the rocks, with shoals of fish, crabs and octopuses swimming and skuttling around. There's lots of brilliantly coloured lone fish too. Leopard's spots and zebra strips seem to be all the rage. Most impressive were the large black spikey sea anenomies with blue irridscent centres around bright orange mouths.
There's not much to the town itself. We hired a scooter for an afternoon ( more than enough - the traffic is light, but terrifies me. Even the police 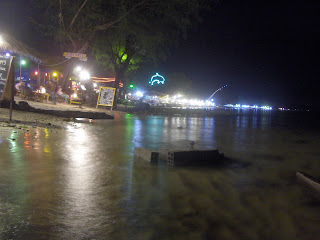 ignore the red lights. Utter chaos. ) and didn't find much to see other than the, admittedly awesome, beaches. The local cops were out on a money making venture too. Apparantly you should have an International Driving Permit in Cambodia, which I haven't got. I managed to convince the cops that the Euro license was a worldwide jobby and got prodded on my way. A rather morose looking Aussie explained that he hadn't been so persuasive and the cops wants him to pay $10 to avoid a trip to the local station. Bolivian border guards Xmas fund again. Pay it and save the hassle I say.
Posted by Al at 06:05