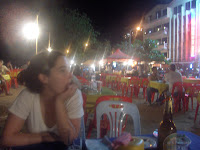 After a ten hour bus journey, we finally returned to the banks of the Mekong at the Lao capital of Vientiane. Boy, has the river grown since we left it. We arrived into town pretty late so we headed straight to the river bank for a bargain tea of hot red curry and spicy crispy noodles from some open air kitchens that had set up on the sand. It was a nice end to the day, but the river bank didn't look quite so salubrious in the morning light...
The builders working on the top floor of the guesthouse had us up and about early in the morning by seeming to use tactical nuclear munitions in an attempt to demolish whatever they were upset with. This turned out to be a good thing. Vientiane is seriously hot and the sun is very powerful around noon. Bearing in mind my experience cycling through the midday heat in India last year, we made every effort to be out and about in the mornings and late afternoons and to be in hiding from the sun during it's peak. We also stumbled across a nice shop for breakfast baguettes and coffee whose main selling point for me was that the waiter had clearly entered the All Laos Boris Johnson Lookalike Competition. What a barnet for us to behold and admire.

We had an interesting few hours in the Lao history museum. Did you know the Lao were keen on standing stones ? Perhaps Obelix of Gaul was the first Frenchman out here ? The most interesting displays went through the more recent history of the country, from the growth of anti-French Colonial feeling in the 1920's, through the active fight for independance in the 50's, the struggle against US sponsored forces spilling over from the Vietnam War in the 60's, the establishment of a Lao government in the early 70's and finally the Communist take over in 1975. The museum had a very Soviet feel to it, with lot's of bust 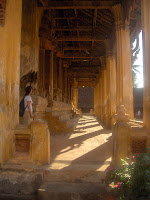 s and pictures of Lenin and much communist phraselogy.
Just up the road from the museum is the Wat Si Saket. This beautiful 18th century wat that was quite different from the others we've come across on our travels in that it wasn't glitzy and gold, but was naked in it's old wooden construction. The roof beams would have been at home in the Tobie Norris pub in Stamford. It was also cloistered on all four sides. The cloisters contained tho 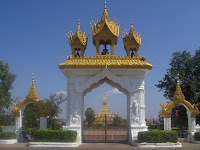 usands of little Buddha statuettes hidden away in niches cut into the outer walls.
We also visited the Wat Pha That Luang. This big gold wat is supposedly the most important in Lao and from a distance it looked spectacular. Up close if was a bit scraggy and down at heel..

About 25km out of central Vientiane lurks the Buddha Park. One fellas obsession with this Buddha dude lead him and his cronies to create literally hundreds of statues and place them in this lovely garden. Most are Buddist, but there's a liberal sprinkling of Hindu deities too. Some are only a few feet tall, but others are the best part of 50' long. Huge. They're all cast from concrete and unlike in the UK, the material has weather to give a lovely old stone kind of finish. I know it sounds a bit naff, but it was really good. We really enjoyed the local bus journey too. 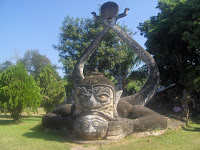 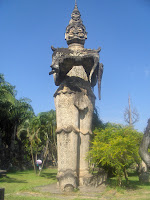 Here's a sweep of the Buddha Park.

We've had a good couple of days in Vientiane. It's not the prettiest of cities. It's lost much of its colonial history to a swathe of contrete. There are a few tree lined boulevards remaining, but not enough to bring it up to Luand Phrabang standards. Anyway, we're off for a big fish supper by the Mekong tonight and then we're off to Kuala Lumpur. For the day.....
Posted by Al at 08:34