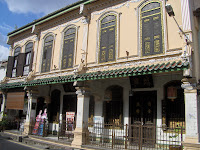 We jumped on the bus from Kuala Lumpur and two hours later arrived in Malacca. It's the famous port that gave it's name to the straits between Malaysia and Indonesia. It was very nearly a nice trip out, but it was ultimately ruined by the chronic traffic problems that seem to afflict the centre of the town.
There are some nice old colonial buildings in the old quarter of the city. They were mainly from the period that the Dutch ruled the roost, but there were some remains of the old Portugese fort alongside the river. There wasn't really much to suggest the Brits had been here other than a few monuments and plaques celebrating Queen Victoria's Silver Jubilee. Even thought the buildings were nice, you were always peering over the roofs of cars as the ever present traffic jam crawled noisily and smellily past. To add the the traffic noise, the locals had taken the time and effort to fit large stereo systems to their previously silent bicycle rickshaws. They used these systems to pump out dreadful 80's Euro-pop at ear splitting volume. Bum-sniffers the lot of 'em.
The day was rounded off nicely by the two hour return trip ballooning to four hours as the coach trundled it's way back into Kuala Lumpur in a huge holiday traffic jam. The driver had a peculiar staccato technique with throttle and brake that he skillfully used to thoroughly piss off every single passenger on board.