Big bus journey this one, bit it was probably less hassle to get it all done in one long day. And we didn't really want to spend another night in Phnom Penh without good reason.

It was a pretty trip. There are some small hills near Sihanoukville that were very attractive, but the real interest was beyond Phnom Penh. 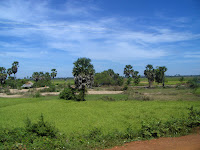 We seemed to enter a bit of a time warp. Other than the road traffic and occasional small town, you be hard pressed to see anything to suggest that we're in the 20th, never mind the 21st century.
The countryside was patchwork of rice paddies, rivers and lakes, with the occasional higher bit of ground featuring a few homesteads and farms.
Most of the people we could see seemed to live in small hamlets close to the road. Houses tended to be wooden and were usually built on stilts. I presume the rainy season causes frequent flooding, or perhaps it helps keep people cool ? Amongst the houses there were kids running around chasing black pigs and chickens, people flaying rice, drying fruit and waving hammers at ancient looking farm machinery. Most houses had an ox cart parked out front, with a couple of skinny looking cows tied up close by. Every now and again, there would be a few huge water buffalos, though these were sometimes hard to spot as they tend to lurk in the ponds with only nostrils, ears, eyes and big scary horns above the surface. Mind you, it gives the ducks somewhere to sit.
The bus broke down briefly ( soon sorted with a bucket of water and a bit of percusive maintenance ) and was soon surrounded was the local kids. Doesn't look like much happens around here. We were only about fifty kilometers north of the big city, but we could have been two hundred years away.
Posted by Al at 08:22