I'm glad to say that we had got off the boat in the correct place, Luang Phrabang, even though it was very much a stealth town lurking amongst the trees along the Mekong riverbank. The reason for the town's leafy camouflage is that it is protected by a UNESCO charter with the aim of retaining it's undeveloped French Indochinese character. So, no buildings above tree height, other than the occasional Wat. 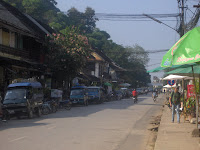 It's a very attractive town as a result. It sits on a
peninsular between the Mekong and Khan rivers, is covered in trees and feels more like southern France than Laos. All the buildings seem to have been built between 1930 to 1960 and are all unmistakably French in style. In addition, it is possible to dine on fine Lao food of an evening, and have a breakfast of pretty decent croissants 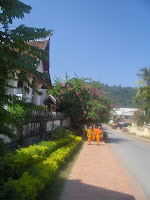 with a large cup of fresh coffee. Grudgingly, I have to admit that the French do have their moments.
It also have a very nice climate. It's certainly very hot during the day, but if you can get out of the sun, the air is quite cool. In the evenings, it's just about perfect for strolling around, though a second layer might be needed if you're sitting down waiting for your tea to arrive after watching the sun go down behind the mountains in the distance. 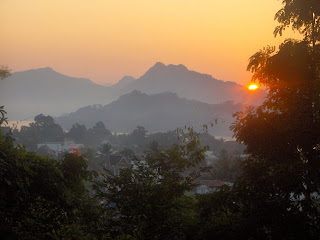 It's quite a touristy town, or the peninsular old French bit is. There's a large night market, but it's not like the ones we saw in Thailand. No tubs of chicken feet here, it's all pressed flowers, and indigenous craft tinkets. The central street is pretty much devoted to tourist activity shops and restaurants and bars. Nice for a stroll.
So, what else can you do in Luang Phrabang ? We spent a day kayaking down the Nam Ou to it's confluence with the Mekong. Glorious scenery. Very steep sided gorges with dense jungle and forest with the occasional jagged peak poking out in the distance. The water was also lovely and cool for a midafternoon dip ( Nam Ou was a clear bluey-green colour, though
the Mekong was a less inviting silty brown ). 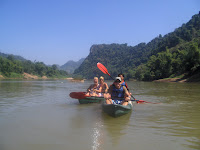 There's also an impressive waterfall, Tat Kuang Si, about 30km out of town. It's quite a big one, and it runs through various layers, some of which look just like a posh hotel infinity pool. The water was pretty chilly, but after clambering up on side, over the upper lip and slithering down
the other, a dip was absolutely neccessary. 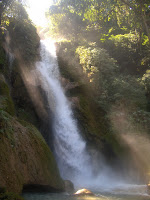 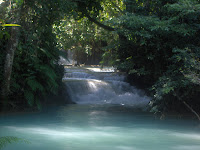