An arduous overnight schlep via Kuala Lumpur ( Yes, I know it's quite a detour, but it saves us, or more precisely our rumps from, a three or four day/night bus extravaganza across the unsealed roads in the south of Laos and the north of Cambodia ) sees us in the capital city of Cambodia, Phnom Penh. It's a big city with about 1.5 million inhabitants and its sits at the confluence of the Tonle Sap and Mekong Rivers. I'm sure the Mekong has been stalking us on this trip....

Flying in showed us that the surrounding countryside was pancake flat and covered in a dense network of lakes, pools and rivers. Perhaps the Mekong delta starts here ? While I've got my geography hat on I can also treat you to another juicy nugget - The Tonle Sap river actually swaps flow direction depending on the season. It's due to some complex interaction between the large fresh water Tonle Sap Lake that sits a few hundred kilometres further north, close to Siem Riep and the Mekong River. Very nice.

So, what's the city like ? Hard work and a bit grim to be honest ! It's bloody hot ( over 32°C at 9am in the shade ), the sun is ferocious and it's very humid all of which conspire to make any kind of physical activity a tiring and very sweaty affair. The city is beset with chronic traffic chaos which generates a lot of pollution, both noise and fumes. Traffic laws are either ignored or non-existant. Traffic generally flows on the right hand side of the road but there are always a few motorbikes or cars running along the wrong side of the road to take a short cut or just to add spice to the experience. Intersections are a mess of horns and creeping bikes, cars, tuk-tuks, trucks and buses. Might is right. Pavements don't really exist. They're either strewn with vehicles, shop fronts, rubbish or electrical installations..... Walking around isn't much fun ! The only way to avoid this chore is to take to the melee with a tuk-tuk, but this isn't really very calming... 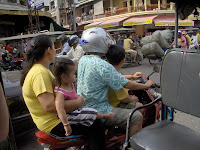 So what have we been doing here ?

We spend one day exploring the dark underbelly of humanity. I'm not going to go into the history of Pol Pot or the Khmer Rouge who governed the country in the late '70's, there's plenty of information on the fishing net, but suffice to say that their policy of converting Cambodia into a wholly self-sufficient, communist, agrarian society ( banning religion, outside communications, money, science and technology etc ) led to the brutal slaughter of several million of their own people. Nearly 20% of the population died. Everybody knows somebody who disappeared. It was a true genocide.

We visited Tuol Sleng, also called S-21, which was coverted from a high school into a centre for torture and exections. Over fourteen thousand people met their grisly ends within it's grounds. Only seven people survived after passing through the gates. More poignant than the cells and instruments of torture on display, were the rows and rows of mug-shot photographs of scared looking men, women, children and babies that were taken on their arrival. I've never been but I'd imagine only places like Auschwitz would come close to the feeling of this place.

We also travelled out of the city to visit Choeng Ek. This was one of about three hundred and eighty killing fields used by the Khmer Rouge to slaughter those that crossed their path. People were marched to the sides of pits dug in the ground and simply clubbed and hacked to death, their bodies being dumped into the mass graves. Some of the pits have been excavated, whilst some are still untouched. A large white Stuppa, containing over eight thousand skulls extracted from the pits, sits at the centre of the site as a monument to those that died here and throughout Cambodia. The site itself is quiet and pleasant. It feels like and orchard with fruit trees and chickens running around. It is truly chilling to wander through it and to try and imagine the terror and evil that happened here only thirty years ago. 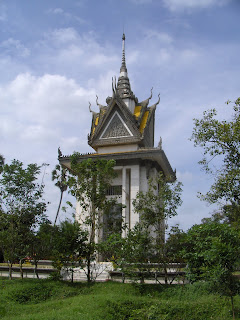 Fortunately, there are some more pleasant things to see and do in Phnom Penh.

The Royal Palace is beautiful and sits in manicured garden grounds. The silver pagoda, whose 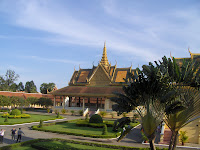 floor is made from solid silver tiles ( about four tonnes worth ! ) is stunning as it the Emerald Buddha it contains. The National Museum is definatly worth a visit. It contains a large collection of historical Khmer artwork going back over a thousand years. There are numerous labyrithine markets 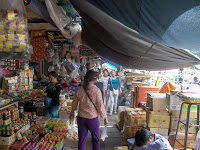 to explore and to gawp at weird and wonderfull produce.

There is also the pretty location of the city on the river banks of the Tonle Sap to stroll along. Next to the banks of the river is the Foriegn Correspondents Club. It's the old drinking club frequented by the press that reported on the wars that led up to the Khmer Rouge government. It reminded me alot of Raffles in Singapore. Very posh. Surprised they let me in.

We need a break from cities, so next we're off to the seaside.