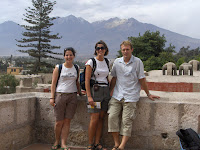 We got a fancy bus for the 6 hour trip from Puno to Arequipa. Very nice.

The intention was to spend 1 day in Arequipa itself and then another in Colca Canyon ( double the depth of the Grand Canyon apparently ). This is where a little more research would have benefitted us. Colca was a further 6 hours bus travel away, so regrettably, we decided to ditch that idea and spend an additional lazy day in Arequiba.

Arequiba itself has a lovely setting. The photo shows us perched on a Nunnery with one of the 3 surrounding volcanos in the background. The city has a fantastic town square surrounded on 3 sides by colonial arches, and on the 4th, by a large cathedral made of white volcanic stone. There´s lots of other grand old buildings lurking around, but to be honest, the real highlight was a tour of a Inca museum that housed the mummified remains of a 500 year old human sacrifice that was discovered about 10 years ago on a local mountain top. Very spooky, but very interesting.

Dog and I were feeling a little silly during our tour of the Nunnery thing, so decided to treat you to a cheeky little nun-joke. Unfortunately, I don´t know how to rotate video clips, so you´ll have to lean to the right to fully appreciate the glory of our production.