The Inca Trail is one of the major tourist draws to Cusco and Peru. It´s a 45km trail that follows an ancient Inca route to the famous city of Machu Picchu. It takes 4 days so I´ve split the blog up a little for easy armchair reading.

Day 1, was pretty easy. A minibus drove us a couple of hours from Cusco for our last sniff of civilisation ( ish ) when we stopped for breakfast in Ollantaytambo. After that is was a short ride down into the valley of the Urubamba river. We got our boots on, lifted up our packs and then spent a very pleasant few hours trotting the 12km to the first campsite. Most of the journey was along the river ( hence easy gradient ), but the last couple of k´s up to the campsite gave us a indication of the what faced us for day 2. The campsite was in a place called Wayllabamba which was at 3000m above sea-level. Breathing whilst exercising was noticably difficult !

Anyway, the cook for our group whipped up an amazing feast using a primus stop and 14 Gringos went to sleep happy... I also seemed to gain a reputation for eating alot....Gits.

Day 2. Eeek ! Day 2 is generally considered to be the most difficult day of the entire trip. Becky and Athena wisely hired porters to carry their packs, whilst Dog and I decided to continue fully loaded and hence to save a few pennies. Jerks. 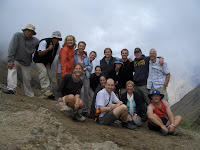 We started from the campsite ( 3000m ) and basically spent all morning crawling up to Warmiwanusca Pass ( Dead Woman´s Pass - 4200 m ). The final few hundred metres were really hard work for all - breathing became more and more difficult, to the point where a short stop would become necessary every 20 steps for so. Eventually, all 14 Gringos made it up, and here´s a photo to prove it. From the left to the right, we have - Jube and Percy ( Qhechu guides ), Vicky ( Manchester ), Kathy ( Guernsey ), Jean ( Manchester ), Jo ( Perth Oz ), Athena, Mona ( London ), Micheal ( Perth Oz ), Paul ( Guernsey ), Becky, Dog, Lynne ( Guernsey ), Carl ( Gold Coast Oz ), Duncan ( Guernsey ) and me. Please don´t rip the mickey about the T-shirt. I´m very sensitive...

After the climb up, we still had to drop back down to the campsite at Pacamay ( 3600m ). All in all, it was a very up hill and down dale day to say the least. Everybody was pretty knackered and indulged in a well earned afternoon kip, only to be woken by another amazing feast prepared by our wonderfull cook ( aptly named Jesus ! )
Posted by Al at 19:35