Day 3 started early ( before dawn ) to make the best of the daylight. If we were hoping for an easy day after yesterday´s exertions, we were not going to be in 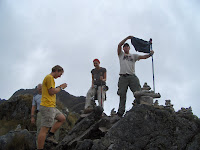 luck. First was another climb up to Runkurakay Pass ( 3800m ). This was renamed Alan´s Pant´s Pass by a scheming Carl who had managed to swipe the large pair of trollies I had been drying on the outside of my pack. Sands of Iwo Jima anyone ?

After the climb up to the pass, the rest of the day was relatively gentle. Up and down all the time, but through wonderfull cloud forest scenery. Jube was fantastic at spotting and explaining about the flora and fauna we passed on the way. Hummingbirds are as common as Sparrows in Oxford up here.
The final campsite was at Winay Wayna ( 2700m ). Before tea ( again awesome food considering we were perched on a mountainside - I was thinking of erecting a small shrine to the cook ) we were treated to a lovely display of swinging genitalia by some naked Germans. A great appetizer . .

Day 4 started well before dawn to give us oppotunity to reach the Sun Gate ( first view of Machu Picchu ) shortly after dawn. Although it wasn´t very far, again the trail was very much up and down, so we were all bit knackered again by the time we got there. Awesome view though. It´s hard to describe the setting of the place, it really is perched on top of a mountain saddle, surrounded by high peaks. No wonder it was ´lost´ for 500 years. Hopefully the video clip will help out a bit. 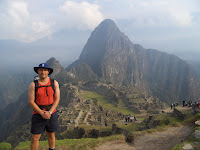 From the Sun Gate it was a short drop down to the start of the city proper. Here´s me in my lovely T-shirt again. Note the peaks in the distance.

We spent the rest of the morning touring the city itself with Jube providing excellent commentary throughout. I´ll not witter on about the city itself. If you want to know more, type in Machu Picchu into google or something. Suffice to say, it´s a truly world class site.
After a pizza and beer stop at the bottom on the mountain ( whilst watching England beat the French in the semi-final of the Rugby World Cup ), we caught the train back to Cusco for a massive kip....
Here´s a crap video clip. Hopefully it´ll give you a bit of an idea of the spectacular setting of Machu Picchu and hence why it is such a draw for folk from all around the globe.