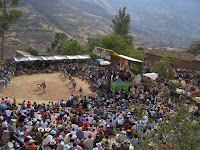 We were invited by one of the ladies that runs the hostel that we were staying in in Cusco, to go along to a traditional Inca Festival in a village called San Salvadore. We really didn´t know what to expect and boy, were we in for a treat !

The village was about 1 hours minibus ride away, and was perched on the side of deep valley. I reckon it´s normally population would have been about 100 people, but there must have been about 2000 folk hanging from every vantage point. The festival lasts for 4 days and is basically an Inca food and dancing competion. Here´s the view from the hillside down to the main arena. 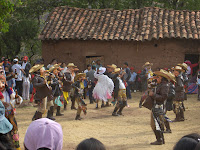 The dancers were fantastic. I think each local village supplied a troup and they attempted to out-do each other with crazy costumes and a variety of music and moves. Some would mount raids into the crowd for small children which they would deposit in a heap, others would twirl around, others would try to whip each others feet, but our 2nd favourites were the Gringos who´d run around swaggering and drinking beer, spraying the crowd etc. Out ultimate favourites were the dudes who dressed up as llamas ( with balaclavas ) who basially took to beating the hell out of each other for the crowd`s entertainment. Have a look at the video clip below !


At lunch time we were invited by a local Mayor ( ! ) to sit down and have some food and booze. We were very generously given a huge plate of food 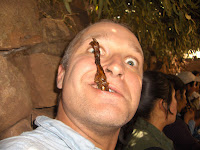 and a glass of chicha. Chicha is the local firewater, made by folk sitting around chewing corn and spitting the result into a bucket - we only found out about this bit later on ... . The food was even more bizzare. On each plate was some corn, chicken, river weed, fish-eggs, guinea pig, tortilla, dubious sausage, a chunk of llama and a chilly pepper hotter than the surface of the sun ! The photo shows me munching on a guinea pig leg. Mmmmmm.

Here´s a short video of folk dressed as llamas, knocking several shades of sh*te out of each other.....