Train from Cusco to Puno 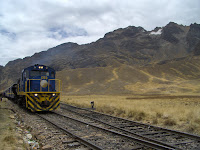 Blimey, Peru is big ! We got the train from Cusco to Puno. Didn´t look far on the map, but it took us over 10 hours. The train was pretty slow, especially as it climbed up through a 4000m high pass, before descending down to the anti-plano that Lake Titicaca sits on. We're getting the bus to Peru's second city, Arequipa, pretty much straight away, but we'll return to Titticaka later on. Just thought I'd try and give an idea of the size of the place with this short video clip. Imagine this scenery for hour after hour, after hour, after hour. And some folk ( mainly the indigenous Quechua ) live out here. Hardy fellas those Quechuas .. . . .