Final stop of our New Zealand tour is Christchurch, biggest city in the South Island at two hundred thousand inhabitants. A few of which we know. Graham and Maree are mates of Becky's from London and they very kindly put us up for three nights. Bill and Sarah are mates of mine from years back when I worked in Bicester for a company called Reynard Racing Cars.

Our first day here was a bit grim as the weather was awful. Never mind, we just jumped into the car and drove into the countryside to Hamner and then sat in some goethermal pools for the afternoon. The rain was a bit cool in the top of your head, and we all stunk of sulphur afterwards, but not a bad way to spend a rainy day. 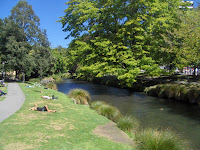 The second day was much nicer, so we met up with Bill, his mate Tom and his daughter Niamh for a tour of Christchurch. The town centre is a bit like Oxford or Cambridge, with nice parks, rivers and old buildings. They even have folks with punts on the river.


After that we headed up Summit Road. Like most places in New Zealand, Christchurch is only a stone's throw from a volcano crater, and the top of this one gives great views out over the city and the Canterbury Plains beyond. Just on the horizon, are the Southe 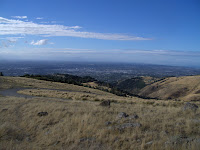 rn Alps, about fifty miles away. Me and the Dog got roped into a game of tig with Niamh which left me panting and the Dog stuck in a bus shelter window....


So, that's it for New Zealand. We've just dropped Becky and The Dog to the airport so they can head off to Oz. We'll grab a bit of lunch and then we'll be back to the airport for our flight to Sydney and onto Singapore.

Here's a sweep from the volcano crater rim down onto the city. For those that know Bill the Mill, you'll note that he is still wearing the same pair of shorts he was wearing when he left England about eight years ago...