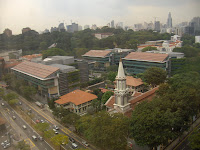 Singapore may be an equitorial island republic just off the coast of Malaysia ( you could throw a stone across ) , but it has a very Western feel to it. The population of four and a half million is predominately of Chinese origin, with a good lump of Indian, Indonesian and Malaysian thrown in for good measure, but the official language is English - a hangover from being a major naval and commercial centre in the British Empire. Pip pip !
The island was apparantly a small fishing port when, in 1819, at the behest of the British East India Company, Sir Stamford Raffles turned up and reckoned, that with a bit of guidance, the place had the makings of a major strategic port. By the time the island became independant in the 1960's, it was a huge urban centre with global military and trading importance.
It's a pretty affluent place, as evidenced by the huge skyscrapers in the centre, but it is run with considerable social conscience. Ethnicities that under colonial rule were loosely segregated into seperate areas of the city are now encouraged to mix. Don't drop your litter here, or deface a wall with graffiti or you'll face a $1000 fine. Try and smuggle in some Bolivi 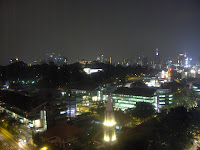 an Marching Powder and you get the chop. Ouch. 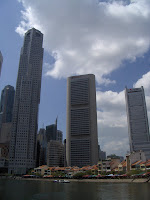 Anyway, enough waffle. It's a really interesting place to spend a few days. Beautiful colonial buildings jostle with modern office blocks for space. Restaurants abound, are generally very cheap, and choice is abundant with Indian, Thai, Chinese, Indonesian and British ( sticky toffee pudding - Yes !!! ) readily available. The people are polite and helpful. The public transport works. The weather is a touch too warm, but that's better than a touch too cold. Unfortunately, Singapore is also great for shopping. Every silver lining has a cloud.. . . .. .
There is also a night zoo. Great idea this, but unfortunately we went at the weekend... along with the rest of Singapore. Arse. Enjoyed eating the animals much more, especially the Chilli crab from Jumbo seafoods ! Mmmmmmm. 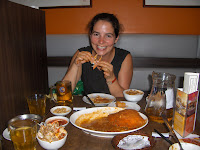