Life has been hard on the road over the last five months ( I feel your sympathy ), so we jumped on a ferry for a couple for hours and sailed to Bintan for a couple of days of beach R&R.
The trip across the Malacca Straits was bumpy to say the least, but it was an amazing journey as we passed through one of the world's busiest shipping lanes. Pretty much all sea trade between the Orient and the Occident, other than that to the Good Ole U S of A, has to pass through the narrow bit of water between Sumatra and Singapore ( hence Singapore's strategic importance ). The water was so full of huge oil tankers, bulk carriers and container vessels, that the ferry had to weave it's way across to Bintan island. We would not have come off well in a collision with ships this size ! Interestingly, some of the ships were registered in Douglas, Isle of Man. I doubt they'd fit in the Irish Sea, never mind Douglas harbour. 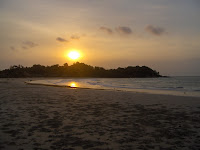 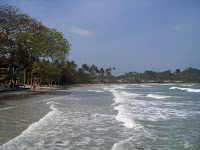 "Bintan lsland is the largest of 3,200 islands in the Riau Archipelago and the 3rd largest of 27 provinces in Indonesia. It was on the island of Bintan that the Sultan of Malacca found refuge from Portuguese attack in the 16th century, mapping tales of legendary importance when Bintan grew as the centre of the powerful Johor Riau Sultanate." Which is all very nice, but to be honest, all we wanted somewhere to laze on a beach for a couple of days before heading back to the drizzle of Blighty. And we got that in spades. It's a real island paradise just like in the brochures. Food was good too. The Indonesian's like it a bit spicy ( arse like a dragon's nostril ! ), but the flavours were great.
Anyway, a couple of days here were great, but now we have to head back home.....
Posted by Al at 09:00