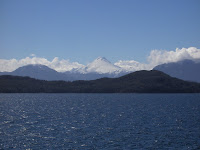 We wanted to get down into deepest Patagonia and what way better than on a luxury cruise ?

Unfortunately, there wasn`t one so we got a car ferry for the 4 day voyage through 1500km of spectacular Chilean coastal 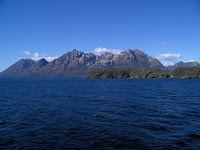 scenery. It was a little cramped in the 4 berth cabin ( The Dog has now been banned from eating fish soup when in shared accomodation after some unpleasant after effects.. ) but it was very snug and generally we all thought the boat was pretty comfortable.
The trip was really all about the scenery and it didn`t dissappoint. Right from the outset we were navigating through channels and inlets between fabulous mountain ranges. We did 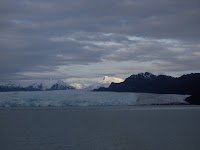 have to head out into the Pacific during one night and boy, did it get rough. We all hunkered down in the cabin during the worst of it, but there was talk of chunder amongst the other passengers in the morning. Not from us hearty sailers though.
Treat of the trip was a close approach to Glacier Pio XI ( snappy name... ) which is supposedly the largest ( by what measure I`m not sure ) in South America. It certainly looked very impressive.

Peurto Natales reminds me of Ramsey ( Isle of Man ) on a wet Sunday in March, so I won`t go into anymore details.... And I won`t even begin to mention German tour groups....
Posted by Al at 18:41