Rurrenebaque is only a 50 minute flight ( or 15 hour bus ride ) away from La Paz, but it´s a world away in terms of enviroment. It´s down in the Bolivian Amazon basin so is hot and very, very, humid.
The Pampas area is basically a huge swamp. Wildlife tends to congregate along the banks of the 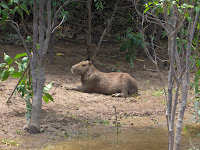 We also spent a morning hiking along a very long and very hot road in search of Anacondas. We only found the skeletons of two young snakes on the road ( probably road kill ), but we did find a large Rattlesnake coiled up in a bush. It´s supposed to be the most poisonous snake in the America´s so instead of poking it with a long stick, we left it well alone.

Here´s a video clip of our close encounter with a Cayman. Moments after taking this clip, the boat disturbed a submerged tree branch. It looked like a Cayman was trying to get into the boat with us, so me and The Dog squealed like little girls .. .