Pucon and the Villarica Volcano

Well the journey down through half of Chile went very well, and morning found us in Pucon in the Chilean Lake District. It´s a very nice town that reminded me and The Dog of Queenstown in New Zealand.

Apart from the stunning scenery, the major attraction is the proximity to Villarica volcano. The volcano is very much active. The town has a system of traffic light signals to denote it´s mood. Green is good. Red is very, very bad. Bit sobering that....
Seeing as the green light was shining, we donned all our clothes, 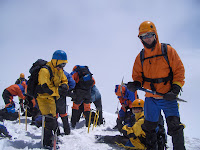 helmets, ice-axes and cramp-ons and headed up in bright spring sunshine. We cheated a little in that there is a ski-lift up the lower slopes, but pretty soon we were climbing hard. The volcano is a perfect cone, so there was no easy route - you just have to zig-zag straight up. Unfortunately, about halfway up, the weather turned on us. Howling winds and low clouds made the ascent into a bit of trial. Athena was badly spooked by the steep slopes and didn´t share my confidence that the ice-axe would arrest a slide. To say she didn´t enoy the final part of the climb would be a cosmic understatement. Anyway, much to her credit, she made it to the top. We hoped to look down into the lava pools in the crater, but the wind and the acrid sulphurous smoke drove us away with streaming eyes and burning lungs after only a few minutes. So, we didn´t really get the views we´d hoped for, but we all felt like we´d acheived something getting up there in the adverse conditions. 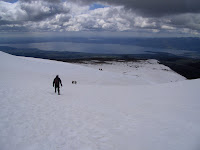 Getting down was a doddle. The slopes are pretty much rock and boulder free, so it was a simple case of sitting down in the snow and sliding down on your arse. The ice-axe provided a brake when we ran out of bottle, which was frequently as we were descending through thick cloud in white-out conditions... Once we did get a bit lower and broke through the low cloud we did finally get some wonderful views of the surrounding mountains, lakes and valleys.
We were all pretty knackered after the days climbing, so for the evening, we headed of to the local agua calientes. The pools were so hot, they were only just tolerable, but like brave little soldiers, we stuck it out and bobbed around soaking away the aches and pains, whilst drinking beers and star gazing. Nice way to end the day.
We´re off deeper into Patagonia tomorrow. Four days on a converted cargo ship loom....
Here´s a bit of video from the side of the mountain, before the weather turned on us.