Cycling Down the World´s Most Dangerous Road

A bit of background first... "The World´s Most Dangerous Road" runs from La Paz up on the Altiplano, down into the jungle near a town called Coroico. A fair part of it is tarmaced, but the dodgy bit is a very steep, rough single track dirt road that clings to the side of a mountain with huge vertical cliffs on one side and huge vertical drops on the other. And, just to spice things up a little, those krazeee Bolivians swap the traffic sense ( ie ride on the left, not the right side of the road ), on some sections of the road. Its not clear which....
Until recently, it was one of the major links between La Paz and the jungle, so was heavy with traffic, but now a modern bypass has provided an alternative route for most of the traffic. About time, ´cos the annual death toll averaged 200 people per annum, hence the nickname.... 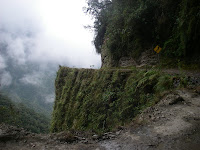 r about 3 Ben Nevis´... The first 30km were on tarmac so it gave us time to adapt to the bikes. The final 45km were on the dodgy single track dirt road. The bikes were excellent, so even though the road was terrible, the bikes seemed to float down even though we were travelling at about 50kmh for bits of it. The drops were a bit intimidating, but the guide just told us n 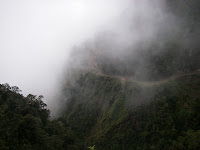 ot to look.... During the decent, 3 of our group of 14 people fell off, though nobody was badly hurt, with a Spanish lad needing just one stitch to his eyebrow. Nobody went over the edge !
Athena had more sense than to subject herself to this trial and decended in the support bus. Unfortunately, this gave her much more time to stare into the abyss at the side of the road, and to spot graves and car wrecks in the bottom..
Bit scary, but a great day out !
Posted by Al at 16:41