The Chilean Torres del Paine National Park covers a small, but very spectacular, mountain range in Souther Patagonia. The mountains are not part of the Southern Andes range ( they were formed about 12million years ago when a plug of granite forced its way upwards through the surrounding sedimentary rock ) and hence they tend to be very distictive. Very pointy and craggy. We came here to ogle the scenery and to trek about 65km across the park.

The first afternoon of the trip was, to be frank, grim . It was only about 8km from the park entrance to the first hostal, but the weather was atrocious. The wind was incredible and seeing as the walk was pretty much entirely across exposed lowlands, it was very much a slog. Think we`ll forget about that one.... 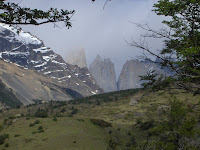 The next day was much more exciting. The most famous bits of the range are the three Torres ( towers ). We climbed up to them, on all fours for the final section, but unfortunately, the weather was pretty poor. Didn`t stop them being an awe inspiring sight though. You can just see two of the towers in the photo on the left. The third tower is hidden behind the lefthand mountainside. The photos we took from much closer are too cloudy. There`s a bit of video at the bottom just to prove we made it ! 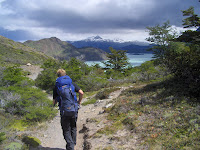 The weather on the 3rd day was much better, which was nice. The walk was relatively easy as we passed Lago Nodrenskjold on our left and Monte Almirante Nieto on our right. Not much more to say other than that the scenery was again breathtaking.

The infamous Torres del Paine Orc
Posted by Al at 14:59