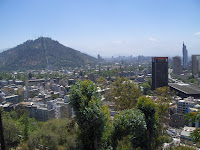 We did actually pop into Santiago previously. About 3 weeks ago we spent a few hours waiting in the bus station for a bus to Patagonia. Hardly time to get a fair impression of the capital of Chile and probably one of the 4 most commercially important cities in South America. We´re here for 3 days this time.

First impressions are a bit strange. We wondered into the centre on Sunday morning and the place was completely dead. Nobody about. The guards outside Pinochet´s old palace looked bored out of their minds. We quickly found a very nice bit of park on the side of a hill and climbed to the top to get a better overview of the city. It´s in a spectacular location on a plane at the foot of the Andes. It was a bit hazy, but you can just make out the snowy peaks in the far background of the photo on the left. Other than the location, it could be a city in either Europe or North America. It didn´t feel like a South American city in the same way that La Paz certainly did. Everything seems to work for instance... Anyway, it´ll do fine for a couple of days before we head of to Rapa Nui which we´re both very excited about.